Before I delve into Day 6 it’s important to point out that this is the only day the Wahoo let me down. A mixture of my utterly exhausted brain and repetitive freezing of the unit result in the loss of the route file. I know the mileage because I made a note of it, aside from that I’m relying on vague flashbacks to flesh out this post. Losing a route irritates me at the best of times. Halfway through the TCR it became utterly soul consuming. The irrational fury and despair I felt at this loss cannot be understated. Just so you know…

Before, the events outlined above the day started as well as any other. An early start fuelled by my hotel packed lunch saw me finally escape the mountains of Austria; well sort of. Leaving the alps behind I stumbled upon a rather large and impressive river called the Danube. Now of course I knew at some point I’d happen across the Danube, but I really did lose track of where I was on a day to day basis so it came as a nice surprise. I don’t have much to say other than its fucking big, and I can’t wait to retire so I can go on a river cruise.

I stopped in Grein for some food, because much to my dismay I’d realised Austria had one last batch of hills to hinder my passage to the Czech Republic. I needed some brake pads and some lube. I purchased one of these items in Grein and it was daylight robbery. That I can’t remember which item is reassuring, as it means I’ve moved on emotionally.

The climbing that followed was exceptionally tough. The hills were minor in comparison to the last few days of Alps, but the accumulated elevation in the legs was taking it’s toll. It was also searingly hot, and the climb provided little shelter from the sun. Mental respite came in the form of a classic car rally which rolled past me for about 20 minutes. I’m not a car geek but I appreciate the aesthetics of older cars. More than that I appreciate dozens of random Europeans honking their horns in support of my personal struggle against the hills. I was sad when the last car zipped past me and I was left alone with myself again.

I had my first memorable wild poo somewhere in these hills. Memorable because of the uncomfortably close heat that made the squatting and straining in the woods even more degrading. I’m wouldn’t consider myself a Princess, but I do like a toilet.

My bike was creaking again. I don’t recall when it started, but it was so bad this day that I decided something must be done. I also noted that it was worse in the heat, and as I look back at the notes I made post race I see that I asked if this was a thing? I still don’t know if this is a thing, answers on a postcard.

Anyway, in the border town of Gmund I found a bike shop. I didn’t want to stop long so decided that it was probably my pedals in need of a grease. 15 minutes later I’d had a painfully one way conversation and had my pedals tightened so much I feared that was them set for life. Sadly, the language barrier meant the brute had tightened them without applying any grease. I accepted this was to be the soundtrack to my TCR and had an ice cream before crossing the border in the Czech Republic. Exciting.

My first impressions of the Czech Republic were good. It was flatter and faster than Austria. I decided that today should be a long day; I’d ride until midnight then bivvy somewhere the other side of the lumps on the elevation profile. 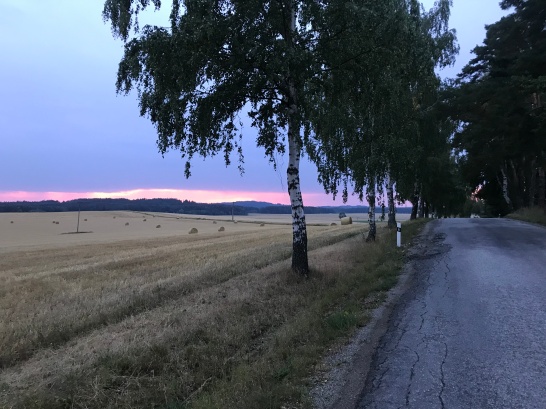 The sunset lulled me into a false sense of security. I had a long night ahead

I stopped for a proper dinner just before dusk. This was something I didn’t do enough throughout. I relied far too much on garages and not proper meals. I had a beer and took my time, I was committed to a long night in the saddle so there was no great rush. This time recharging and taking food on board was time well spent.

The night proved to be a bit of a fucker. Firstly, the lumps were very lumpy and I found it hard going. So much so I very nearly stopped before the final hill, but I decided I’d hate myself in the morning if I did. There were also a lot of drunks about, those Czechs like a drink it would seem. Most paid me no heed, but one did shout something and I’d swear chased me in the darkness up a hill. In hindsight this may have even been a hallucination, I was at my limit so it wouldn’t surprise me.

As I crested the final hill my Wahoo froze. I reset it, which restores the ride but takes an age. I was falling asleep standing up and I didn’t need this hassle. I manage to get the ride back and carried on in search of a bivvy spot. Now I’m a nervous bivvier, I don’t sleep well and can never decide on a spot. As a result I’m still slowly rolling along half an hour later. Desperate to stop but unable to find a spot I’m happy with. Occasionally I stop thinking I’ve found somewhere suitable but then I convince myself I can hear a nearby house and move on again. Tedious to say the least. Eventually I stop at a bus stop on the edge of a village. Its a fancy bus stop with a door and windows. Even so I’m not that happy as its in close proximity to houses and I’m perpetually aware of their existence. However, I set up and lie down to sleep. Then I hear drunk voices closing in on my accommodation. I’m shattered and fear the worst. The last thing I want is to have to engage with drunks with whom I do not share a language, even if they are the friendly type and not the stamp on your head type. There’s no way they don’t see me but thankfully they carry on regardless. I eventually nod off for a couple of hours of restless sleep.

In hindsight, my pure exhaustion on this day probably contributed to my heightened awareness and paranoia. However, I’ve established from pre race rides and from the TCR itself that I don’t bivvy well. If I race again, I’d certainly bivvy only when a hotel wasn’t readily available. Hotels may cost time and money, but for the rest I get its a worthy spend.

At some point in this farce I lose my ride. I can see it in the app but can’t open it. As I fanny on it disappears for good. Mega.

Looking back, this was probably the worst day I had in terms of tiredness. I never came closer to falling asleep on the bike. I also got to that stage where despite wanting nothing more than sleep, the paranoia caused by the fatigue actually stopped me from sleeping. It’s pretty fucked up how badly you deteriorate mentally in these scenarios, and I’m glad I wasn’t confronted by a challenging situation because I think it would have been a struggle.

Maybe I am a princess after all.

View all posts by hankreardencycling